The Work of AMUA Rockhampton

Members help out in many aspects of Parish and Community life including: Diocesan events include:
Rockhampton Diocese MU commemorated its Centenary in 2011. In the lead up to the celebration a special candle processed through the parishes to be in the Cathedral in time for their Celebration Eucharist. A smaller candle was presented to the Blackall parish where MU began.

A tapestry centenary cushion now graces the sanctuary of the Cathedral as a permanent reminder of this, and the centenary candle is used on Diocesan MU occasions.

Approximately $2,500 to assist a Literacy Programme in Papua/New Guinea was raised as a Centenary project.

The Australian theme in 2014 was “God gives a Future”. During an Orientation Day to start the year, the Diocesan Council was asked to consider “Is there anything that you would like to see us do, that we could do? Two suggestions came up:

That a Thought for the Week from MU be produced for inclusion in parish pew. This was widely and immediately accepted by Australian Executive, and our Prayer and Spirituality Coordinator took it on board, so that it is now part of what we do.  Many parishes throughout Australia use it, and it is now on the UK website, also.

Our Diocesan Social Responsibilities Coordinator asked us to do something to raise awareness of the terrible scourge of Domestic Violence, of which the Rockhampton region has the highest incidence inEnlisting the support of the Police and Anglicare, and now Relationships Australia, has led to some very worthwhile initiatives including a free Sausage Sizzle in a local playground for White Ribbon Day, and the establishing of a Women’s Shelter on the Capricorn Coast which the local Council has taken on board, with great interest from Anglicare and other local community DV groups. Progress is being made on this, though it will be a Safe House to start with, given the distribution of funds for two new Women’s Shelters in Queensland went to Townsville and the Gold Coast. Cyclone Marcia held up the proceedings for many months.
​
We are also very keen to work on prevention, promoting the Choose Respect Code of Behaviour where we can in schools etc., and also at the White Ribbon Day event.

In conjunction with the diocese, we have organised a Community Vigil for the 16 Days of Activism against Gender Violence in both 2015 and 2016, with excellent support from many sections of the Community.

For the 140 year Anniversary of Mothers’ Union in 2016, every member was given a little calico flag to decorate and inscribe with what MU meant to them.  We ended up with a magnificent length of bunting, with 70 flags illustrating the collective achievements of MU in the Diocese.  The bunting was displayed in each parish for a couple of weeks, and was taken to Melbourne for Australia Council in 2016. We also had an “Interview” with Mary Sumner, which was also performed at Australia Council and other Dioceses have requested the script. Parishioners commented that they had no idea of the extent of MU activities both locally and Australia and worldwide.

On Lady Day 2017, as part of the Lady Day Eucharist, we began with the Candle Liturgy from our Worship Book to celebrate 125 years of MU in Australia.  During the Service we admitted three new members, and acknowledged many with Long Service awards and certificates, including Caritas members.

It is important that MU members pray and think positively about what needs action in our community, link with community groups already working in the chosen field, and much good can come of it. 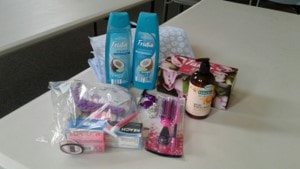 The parishes with MU branches marked the 16 Days of Activism in 2019 with Prayer Trees in their churches on which parishioners were urged to hang prayers for victims, perpetrators, children; in fact, anyone affected by or involved in Gender Violence. The prayers were offered during intercessions at the end of the period.
One parish took their tree to the town Christmas Tree Festival organised by their parish to raise awareness in the wider community. As well, members pack toiletries for the local Women’s Shelter.

Diocesan President Noelle Frazer and Mary Sumner (Alice Hare) with some of the celebration bunting.