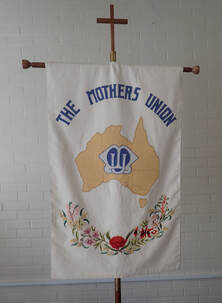 The current Australian banner was made by the late Mary Coyne - former Diocesan President of MU Sydney and then Australian Secretary during the time that Jan Livingstone was Australian President.
​The banner is an exact copy of the one made by the Queensland Embroiderers' Guild for the Mothers' Union worldwide conference held in Brisbane in 1979. The 1979 banner had been repaired many times and was really well past its use-by date. It had been folded up and carried all around Australia, and beyond, over many years.

The banner is traditionally held in the parish church of the Australian President when it isn't travelling with her.